Species of the Mojave Desert

There is an abundant amount of species of the Mojave desert.  Below we talk about some of the more common species that roam this California desert.

Animals of the Mojave Desert

The burrowing owl is a small owl found in North and South America.  Burrowing owls can be found in several habitats such as grasslands, desert areas, and open dry areas.  They nest and roost in burrows, hence their name.  Like most owls, burrowing owls do their hunting from dusk until dawn.  Read more about the burrowing owl here. 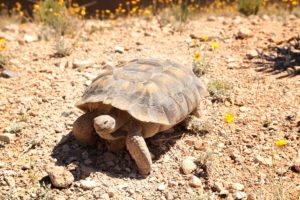 The Desert Tortoise is native to the Mojave desert and can be found through the Southwestern United States.  The species range includes Arizona, California, Nevada, Utah. The desert tortoise can live anywhere between 50 to 80 years old.  Their main habitat consist of Joshua tree woodland, Mojavean desert scrub and Sonoran desert scrub.  Desert tortoises mainly live in their burrows most of the time.   You can read more about the desert tortoise in our blog post here.

The Mohave ground squirrel is a small rodent that lives in the western part of the Mojave desert in California.  It spends most of its life in burrows to avoid the harsh conditions of the desert habitat.  It can also sometimes be found in Joshua trees, creosote bush and saltbush.  They mainly feed on seeds and bushes.  The Mohave ground squirrel is listed as a threatened species under the California Endangered Species Act (CESA).

Plants of the Mojave Desert 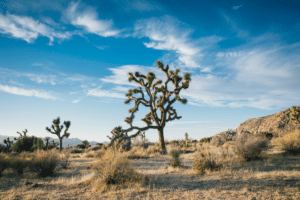 The Joshua tree has become a symbol of the desert and is easily recognized by the natives in Southern California.  It is a suitable habitat for many species, including the Mojave ground squirrel mentioned above.  Typically, these trees live around 150 years old and can grow up to almost 50 feet.

The creosote bush is a prominent species in the Mojave desert.  This plant can grow up to 10 feet. The flower petals of the plant are yellow in color.  It gets its name from the odor of creosote which is compared to the smell of rain.  The rings found on the creosote bush are considered to be the oldest living things on Earth, from 11-14 thousand years! 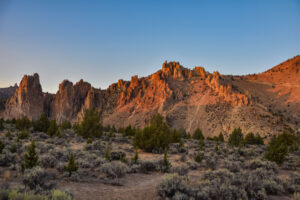 Sagebrush is an aromatic shrub that grows in parts of the Mojave desert.  This plant provides habitat and food for several species, such as pronghorn antelope, pygmy rabbit and mule deer.  Sagebrush contains many branches with yellow flowers and gray foliage.  It can live pretty long, reaching over 100 years old.

Cholla is part of the genus Cacti and are known for their barbed spines that attach to skin and other items.  Most chollas have either green or orange flowers and bloom between April to June.  Chollas can grow up to 15 feet in height.